Joints are formed by the ends of two or more bones connected by tissue called cartilage. Healthy cartilage serves as a protective cushion, allowing smooth and low-friction movement of the joint. If the cartilage becomes damaged by disease or injury, the tissues around the joint become inflamed, causing pain. With time, the cartilage wears away, allowing the rough edges of bone to rub against each other, causing more pain.

Click the desired topics below to find out more.

Total hip replacement is a surgical procedure in which the damaged cartilage and bone is removed from the hip joint and replaced with artificial components. The hip joint is one of the body's largest weight-bearing joints, located between the thigh bone (femur) and the pelvis (acetabulum). It is a ball and socket joint in which the head of the femur is the ball and the pelvic acetabulum forms the socket. The joint surface is covered by a smooth articular cartilage which acts as a cushion and enables smooth movements of the joint.

Total knee replacement, also called total knee arthroplasty, is a surgical procedure in which the worn out or damaged surfaces of the knee joint are removed and replaced with artificial parts. The knee is made up of the femur (thigh bone), the tibia (shin bone), and patella (kneecap). The meniscus, the soft cartilage between the femur and tibia, serves as a cushion and helps absorb shock during motion.

Revision hip replacement is a complex surgical procedure in which all or part of a previously implanted hip-joint is replaced with a new artificial hip-joint. Total hip replacement surgery is an option to relieve severe arthritis pain that limits your daily activities.

The shoulder is a highly movable body joint that allows various movements of the arm. It is a ball and socket joint, where the head of the humerus (upper arm bone) articulates with the socket of the scapula (shoulder blade) called the glenoid. The two articulating surfaces of the bones are covered with cartilage, which prevents friction between the moving bones. 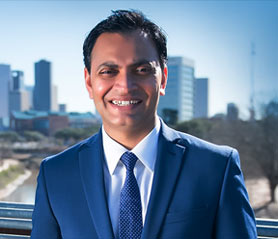